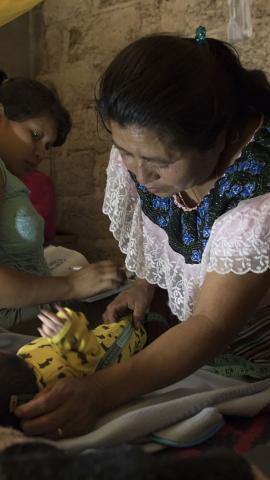 Birth Wars was screened at Commffest 2020.

Janet Jarman Director, Producer  photojournalist and documentary filmmaker.
Filip Lein writer,  Producer
Rafaela López Juárez was determined that if she ever had another child, she would try to give birth at home with a trusted midwife, surrounded by family. Her first birth at a hospital had been a traumatic ordeal, and her perspective changed drastically afterward, when she trained to become a professional midwife.

“What women want is a birth experience centered on respect and dignity,” she said. She believes that low-risk births should occur outside hospitals, in homes or in dedicated birth centers, where women can choose how they want to give birth.

In late February, Ms. López and her family were anticipating the arrival of her second child at their home in Xalapa, Mexico, while following the ominous news of the encroaching coronavirus pandemic. She gave birth to Joshua, a healthy baby boy, on Feb. 28, the same day that Mexico confirmed its first case of Covid-19. Ms. López wondered how the pandemic would affect her profession.

About 96 percent of births in Mexico take place in hospitals that are often overcrowded and ill-equipped, where many women describe receiving poor or disrespectful treatment. The onset of the pandemic prompted concern that pregnant women might be exposed to the virus in hospitals, and women’s health advocates in Mexico and globally expressed hope that the crisis might become a catalyst for lasting changes to the system.

A national movement has made determined but uneven progress toward integrating midwifery into Mexico’s public health system. Some authorities argue that well-trained midwives would be of great value, especially in rural areas but also in small nonsurgical clinics throughout the country. But so far, there has been insufficient political will to provide the regulation, infrastructure and budgets needed to employ enough midwives to make a significant difference.

During the first few months of the pandemic, anecdotal evidence suggested that midwifery was gaining traction in the country. Midwives all over Mexico were inundated with requests for home births. The government encouraged state authorities to set up alternative health centers that could exclusively focus on births and be staffed by nurses and midwives.

As Covid outbreaks spread, health authorities around the country started to see sharp declines in prenatal consultations and births in hospitals. At the Acapulco General Hospital in Mexico’s Guerrero state, Dr. Juan Carlos Luna, the maternal health director, noted a 50 percent decline in births. With skeletal staffs at times working double shifts, doctors and nurses pushed through under dire conditions. “Nearly everyone on my team has tested positive for the virus at some point,” Dr. Luna said.

Inside the Covid-19 intensive care unit at Acapulco General, doctors treated María de Jesús Maroquín Hernández. She had developed breathing problems at 36 weeks pregnant, prompting her family to drive her four hours to the hospital. Doctors isolated Ms. Maroquín while her family waited outside, watching funeral workers carry away the dead Covid patients and worrying that she would be next. She was discharged after five days and soon gave birth, via emergency cesarean section, in a hospital near her home. She and her husband decided to name their baby girl Milagro — miracle.

In Mexico’s Indigenous communities, women have long relied on traditional midwives, who have become even more important today. In Guerrero, some women have given birth with midwives at dedicated Indigenous women’s centers called CAMIs (Casas de la Mujer Indígena o Afromexicana), where women can also seek help for domestic violence, which CAMI workers say has increased. But austerity measures related to the pandemic have deprived the centers of essential funding from the federal government.

Other women have chosen to quarantine in their communities, seeking help from midwives like Isabel Vicario Natividad, 57, who keeps working though her own health conditions make her vulnerable to the virus.

As Covid-19 cases surged in Guerrero, state health authorities reached out to women and midwives in remote areas with potentially high rates of maternal and infant mortality.

“If the women are too afraid to come to our hospitals, we should go find them where they are,” said Dr. Rodolfo Orozco, the director of reproductive health in Guerrero. With support from a handful of international organizations, his team recently began to visit traditional midwives for workshops and to distribute personal protective equipment.

In the capital city of Chilpancingo, many women discovered the Alameda Midwifery Center, which opened in December 2017. During the initial phase of the pandemic, the center’s birth numbers doubled. In October, Anayeli Rojas Esteban, 27, traveled two hours to the center after her local hospital could not accommodate her. She was pleasantly surprised to find a place with midwives who actually allowed her to give birth accompanied by her husband, José Luis Morales.

“We are especially grateful that they did not cut her, like they did during her first hospital birth,” Mr. Morales said, referring to an episiotomy, a surgical procedure that is routine in hospital settings but increasingly seen as unnecessary. While Mexico’s state health authorities struggled to contain the virus, the situation in the nation’s capital further illustrated the dangers and frustrations that women felt.

In the spring, health authorities in Iztapalapa, the most densely populated neighborhood of Mexico City, scrambled as the area became a center of the country’s coronavirus outbreak. The city government converted several large public hospitals in Iztapalapa into treatment facilities for Covid-19 patients, which left thousands of pregnant women desperate to find alternatives. Many sought refuge in maternity clinics such as Cimigen, where the number of births doubled and the number of prenatal visits quadrupled, according to the clinic’s executive director, Marisol del Campo Martínez.

Other expectant mothers joined the growing ranks of women seeking a home birth experience, for safety reasons and to avoid a potentially unnecessary cesarean section. In Mexico, roughly 50 percent of babies are delivered via C-section, and pregnant women face pressure from peers, family members and doctors to have the procedure.

In July, Nayeli Balderas, 30, who lived close to Iztapalapa, reached out to Guadalupe Hernández Ramírez, an experienced perinatal nurse and the president of the Association of Professional Midwives in Mexico. “When I started to research about humanized birth, breastfeeding, et cetera, a whole new world opened for me,” Ms. Balderas said. “But when we told our gynecologist about our plan, her whole face changed, and she tried to instill fear in us.” Undaunted, Ms. Balderas proceeded with her home birth plan.

Her labor, when it came, was long and increasingly difficult. After 12 hours, Ms. Balderas and her husband conferred with Ms. Hernández and decided to activate their Plan B. At 3 a.m., they rushed to the private clinic of Dr. Fernando Jiménez, an obstetrician-gynecologist and a colleague of Ms. Hernández, where it was decided that a C-section was needed.
In September, on the other side of Mexico City, Maira Itzel Reyes Ferrer, 26, had also been researching home births and found María Del Pilar Grajeda Mejía, a 92-year-old government-certified traditional midwife who works with her granddaughter, Elva Carolina Díaz Ruiz, 37, a licensed obstetric nurse. They guided Ms. Reyes through a successful home birth.

“My family admitted that they were sometimes worried during the birth,” Ms. Reyes said. “But in the end, they loved the experience — so much so that my sister is now taking a midwifery course. She already paid and started!”

As winter begins, Mexico is confronting a devastating second wave of the coronavirus. Hospitals in Mexico City are quickly running out of space. The much-discussed government midwifery birth centers have not yet come to fruition, and medical workers at prestigious hospitals like the National Institute of Perinatology, or INPer, are working around the clock.

Early on in the pandemic, INPer personnel discovered that roughly one-quarter of all women admitted to the hospital were testing positive for the coronavirus. Administrators set up a separate Covid-19 ward, and Dr. Isabel Villegas Mota, the hospital’s head of epidemiology and infectious disease, succeeded in securing adequate personal protective equipment for the staff. Not all frontline workers in Mexico have been this lucky; the Covid-19 fatality rate for medical personnel in Mexico is among the highest in the world.

When Grecia Denise Espinosa learned she was pregnant with twins, she made plans to give birth at a well-known private clinic. But she was shocked by the high cost and decided to consult doctors at INPer instead. To her surprise, when she entered the hospital in November, she tested positive for the virus and was sent to the Covid-19 unit, where doctors performed a C-section.

Maternal health advocates have long said that Mexico’s obstetric model must change to center on women. If ever there were a moment for health authorities to fully embrace midwifery, now is the time, they say, arguing that the thousands of midwives throughout the country could help alleviate pressure on an overburdened and often distrusted health care system while providing quality care to women.

“The model that we have in Mexico is an obsolete model,” said Dr. David Meléndez, the technical director of Safe Motherhood Committee Mexico, a nonprofit organization. “It’s a model in which we all lose. The women lose, the country loses, and the health system and medical personnel lose. We are stuck with a bad model at the worst moment, in the middle of a global pandemic.”